Don’t let the Firewall decide what you have access to

The Great Firewall – is a Chinese Internet reality that closes the information door to millions of people, who are forced to live in a parallel online universe, apart from the rest of the digital world. We at KeepSolid are here to help you to avoid the internet censorship. VPN Unlimited is the key that can open a door to the content you want.

Let’s appeal to some historical data 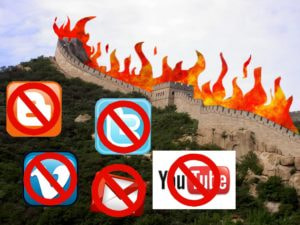 The initial steps to control Internet content in China were taken in 1997. It was a government project to protect the current political principles. The name of the campaign was The Golden Shield Project. Shortly the same year, the Wired magazine nicknamed it “the Great Firewall”.

Started from 2003 the old-style censorship was replaced with a massive surveillance and censoring system. The purpose was to expand the active surveillance over the gigantic online database. According to the OpenNet Initiative, the Wall became the most sophisticated content-filtering Internet regime in the world.

“The firewall is a frustrating feature of life that splinters the Chinese world into two. One world stands for free information and the exchange of ideas, the other for censoring and monitoring.” – said the Chinese writer Murong Xuecun, in his interview with The New York Times.

The issue about the informational prison in China is still on the top of its relevancy. As a proof of this fact, around 3,000 websites are blocked in China so far. The black list includes social websites (Facebook, Twitter, Instagram), media (The New York Times, YouTube, many pages of Wikipedia), search engines (Google, foreign versions of Baidu and Yahoo), apps (Google Play) and work tools (Google Docs, Gmail, VPN sites).

There is also a tight grip on the number of foreign movies to be shown in China each year. Moreover, the movies are allowed only after the government cuts everything that is considered to be offensive or subversive.

There is a way out

In recent years, more people realize the value of freedom to access any information. Our service is a secure and a high trusted tool to get over the firewall, and enter the web without restrictions.

VPN Unlimited offers you a way to get the Internet freedom, even in tough conditions that are dictated by the Wall. Our service helps you to bypass Internet filters and get an unlimited access to any website you want.

Nearly every day a new VPN provider is disclosed and blocked. VPN Unlimited also fell within the scope of the Wall regime in the past. But, this experience worked in our favor. We fixed the soft spots, and now it makes difficult for the Chinese government to trace our service. Even if the server you are connected to has just been blocked, simply switch to another server in the list, and continue your web surfing. Another piece of good news is that we will refund the time you were disconnected.

At the moment we are developing a new protocol that will close the door on the detecting of our VPN service. Keep up with our blog for the live information about the updates.

Get over the Firewall with VPN Unlimited!