It’s not a superstition: protect your sensitive information from online adversaries. Special sale until Friday 13th 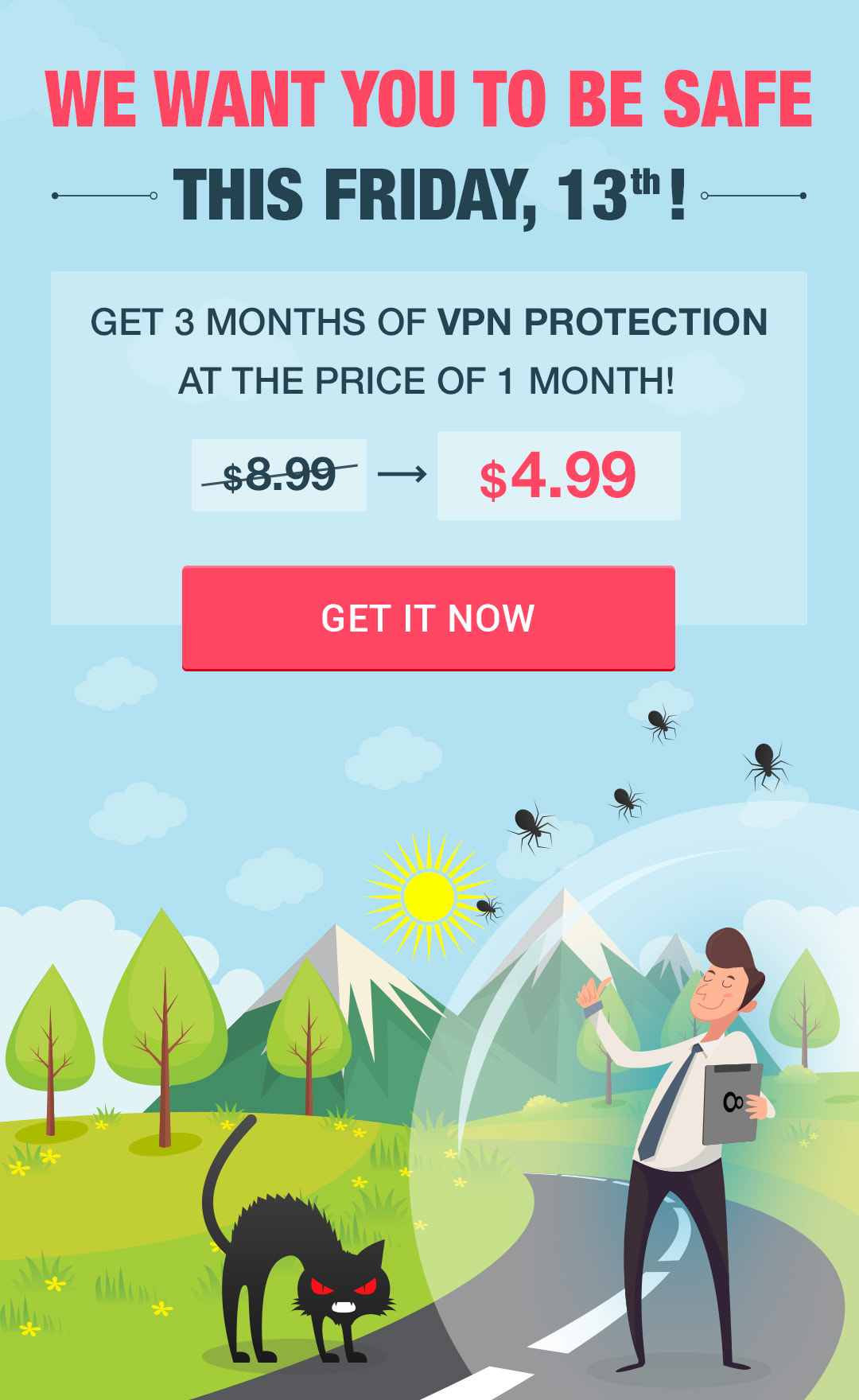 Scared in anticipation of Friday 13th? Fear no more! Spammers, scams, hackers and third-party traders won’t get access to your personal information or browsing habits, because VPN Unlimited will protect you. Starting today, May 11th through May 13th, you can get a 3-month subscription to this security and safety service at the price of 1-month, for only $4.99.

In the USA alone, nearly 20 million people estimated to be dread Friday 13th to the extent that it is classified as a phobia. But why are they so scared? The superstition surrounding this day is said to be originating from the story of Jesus’ last supper with 12 apostoles, 13 people together, on 13th of Nisan Maundy Thursday, the night before his death on Good Friday. Though there is no record of these events being referred to as especially unlucky in conjunction before the 19th century.

The fear of Friday 13th is also linked to mythology. According to one of Norse legends, 12 gods were at a banquet at Valhalla when Loke, the demi god of mischief who was not invited, turned up, bringing the total number of guests to 13. He then caused the chaos that led to the death of one of good gods.

Another legend says Teutonic people considered Friday extremely unlucky, especially for weddings, for “Friday” was named after the Norse goddess Frigg or Freyja, who was the goddess of love, beauty, wisdom, war, death, and magic.

But when did Friday and the number 13 join forces of bad luck to terrorize people? It wasn’t until around the mid to late 19th century that the two were put together as the ultimate unlucky day. From that point up to early 20th century, there are numerous documented instances of people referencing Friday 13th as being the unluckiest of the unlucky, such as the 1907 novel by stockbroker Thomas W. Lawson “Friday the Thirteenth.”

In 2016 there is only one Friday 13th, in 2015 there were 3 “unlucky Fridays.” Better yet – in 2008 the Dutch Centre for Insurance Statistics in an attempted to prove that Friday 13th was no different than any other, found out this day is actually a slightly safer day to drive than other days.  They consider that due to the phobia less people drive on Friday 13th and people are more careful when they have to. They also found similar trends with reported fires and crimes, with less happening on Fridays that coincide with the 13th day of the month.

We are sure this Friday 13th will be extremely lucky for you! Well, at list if you browse the web with VPN Unlimited, your personal data will be safe. Check our deal here.