Bitcoin was one of the hottest topics of 2017. Not surprising, this cryptocurrency with numerous strong benefits triggered the growth of a new market and a lot of hype. Сryptocurrency is a digital currency which uses cryptography for encryption and guarantees users complete anonymity of their transactions. Despite an overwhelming popularity of this subject, lots of people have little or no actual experience with it. For one, there is a misconception that Bitcoin is the only kind of cryptocurrency.

Blockchain consists of blocks of data about transactions. Each block has its own place in the chain, it “knows” which blocks have to go before and after it, and its order can’t be changed by anyone. Blockchain technology is a decentralized database without intermediaries. Every cryptocurrency wallet owner has access to this database and, as a result, it ensures the transparency and independence of all transactions. Such a technology has no need for banks or any other financial intermediary.

Sidenote: Block creation time is the time it takes to generate another block, the shorter it is – the faster the transactions. 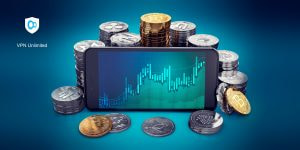 Disclosure of bitcoin’s code resulted in the creation of the cryptocurrency market, which is chiefly based on the blockchain technology. Although it became evident with time that  bitcoin is not as stable as it was thought to be, it is still considered “electronic gold”. If you want to own bitcoins, you may mine them; buy them from exchanges, or directly from other people via marketplaces; or sell your wares and services for bitcoins.

Sidenote: Mining is a cryptocurrency production process. It is based on solving complex mathematical tasks by using computing powers. With each new task, it requires more calculations and electricity than the previous one. This resulted in a situation when miners bought the most advanced GPU, which led to an increase of their prices and unease on a gaming market.

Max. number of coins on the market: unlimited

Ethereum as a cryptocurrency wasn’t the end goal in itself, it emerged as a byproduct of an Ethereum platform. The latter is a machine language and a framework for the development of cryptocurrency. Vitalik Buterin, a 23-year old Russian-Canadian programmer, created the Ethereum project with money gathered through crowdfunding. One more interesting fact is that the donations were made in bitcoins.

So what’s so special about Ethereum? It is a cryptocurrency based on a blockchain, but it uses a smart contract technology. This contract is an electronic algorithm that ensures fulfillment of a fair deal under the agreed-upon terms. The main advantage of smart contracts is that it is controlled by a machine, not people. 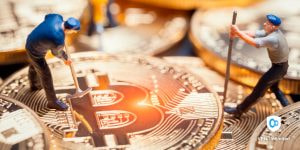 The simplest example, you and your friend make a wager on a soccer game result. You bet on Barcelona, your friend bets on Real Madrid. You write down the terms of the bet. What happens next? The smart contract withdraws the amount from your accounts until those conditions are met. When the match ends, the system checks the results and pays to the bet winner.

In the future, such a technology may be increasingly acknowledged and recognized in business, insurance, taxation, trade, elections, etc. One more difference from Bitcoin is that for mining you will receive a fixed reward, 5 ethereums, whereas Bitcoin reduces the cost for each blockchain every 4 years. Also, Ethereum transactions move faster, with blockchain creation taking only 10-15 sec.

Max. number of coins on the market: unlimited

Ripple is considered to be the fastest cryptocurrency in the world, with the payment transaction taking only 5-10 sec. As we’ve mentioned before, the vast majority of cryptocurrencies are based on the blockchain technology. But Ripple code was written from scratch by Ripple Labs under an order of venture capital firms. The primary goal of its creation was to increase speed of banking transactions and to save money at it. As Ripple Labs mention, a bank with an annual cash flow of $5 000 000 can save more than $1 000 000 using their cryptocurrency.

Another distinctive feature of Ripple is its specific mining technology, cause you can’t mine it in a classical way. This cryptocurrency already exist in the possession of Ripple Labs. The company rewards miners who provide them with computer powers in order to computerize manipulation of massive amounts of scientific and medical evidence. You don’t have to waste your power on abstract mathematical tasks, your calculations will be helpful for science. Or, again, you may just buy ripples. 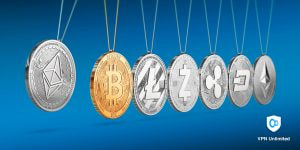 Cryptocurrency definitely has a bright future and there are three reasons why: anonymity, security, and convenience. For instance, lots of companies (VPN Unlimited included) accept bitcoins as payment for subscriptions to their products. The number of cryptocurrencies is increasing day by day and their market’s volatility provides plenty of opportunities for a wannabe trader or a miner to jump in. In order to choose the cryptocurrency to invest in, you should take into account your financial goals, its current market capitalization, and exchange rate history.

We hope this article was useful for you and you learned something new. Stay tuned to VPN Unlimited blog to follow the latest news about cryptocurrency world!