VPNs became a staple software for remote work during the COVID-19 era. This raises many interesting questions:

We present to you the answers to these questions, as well as some curious statistics, in this article. We believe that this information will be interesting to both a layperson browsing the web in search of fast facts and to VPN experts looking to deepen their knowledge on the subject. So, without further ado, sit back and enjoy!

As much as 35% of netizens all over the world use VPNs at least once a month and about half of them do it daily, with a vast majority of VPN users being male. Almost 50% use VPNs when traveling abroad, especially in regions with strict censorship. This can perhaps explain why the countries with the highest VPN adoption rates are Qatar, UAE, and Oman.

The Most VPN users 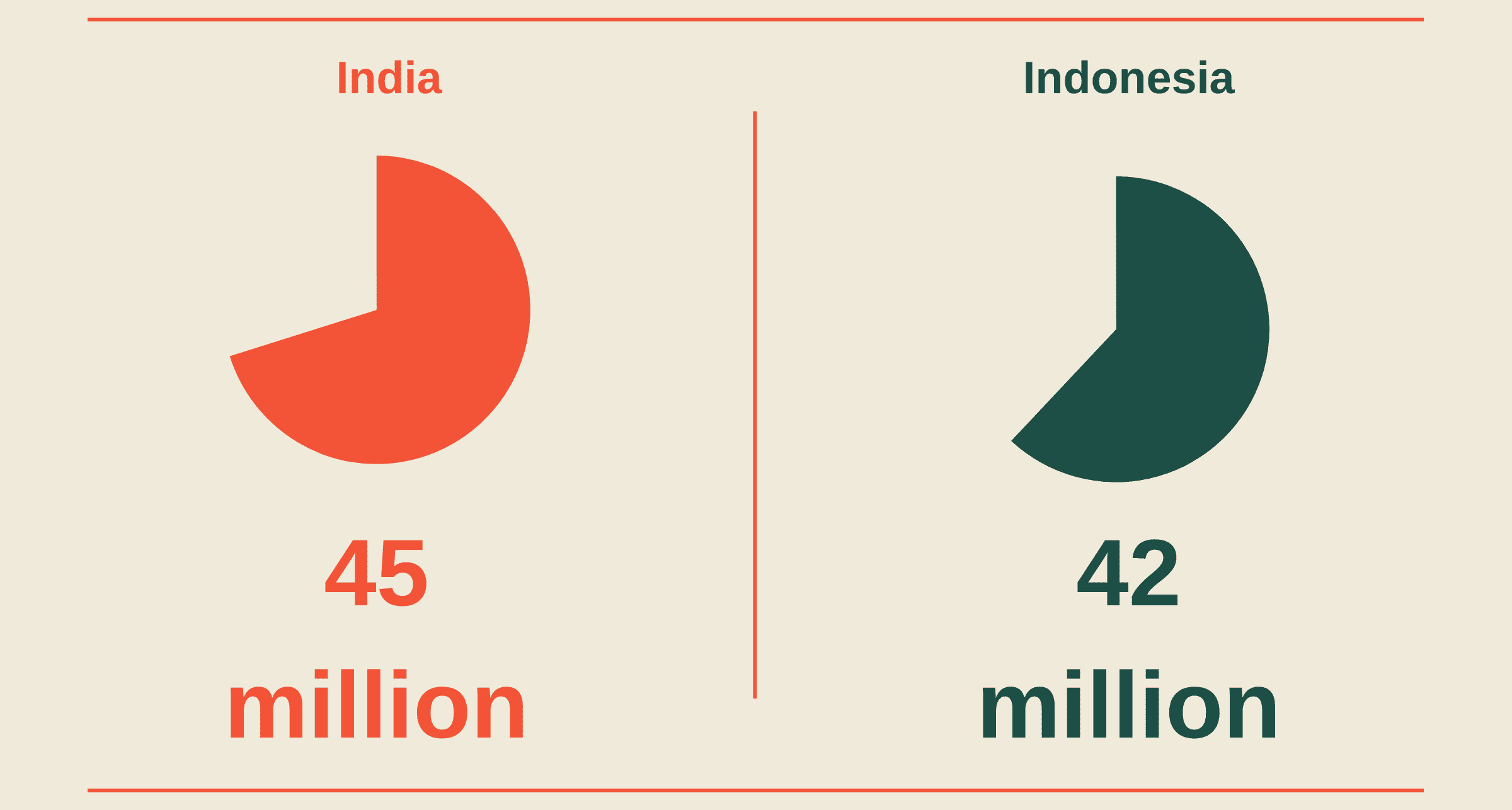 Despite high VPN adoption rates in other countries, India and Indonesia are leading in absolute, with 45 and 43 million total VPN users respectively.

Why VPNs Became So Popular

COVID-19 forced a lot of people and businesses into remote work. While many industries suffered from it, for the VPN market it was almost a blessing. Worldwide VPN usage surged 20% on average at the beginning of the pandemic and hasn’t dropped back since. It’s no wonder, really - people on remote work use VPNs to keep their connection secure and private and to unblock go-restricted content.

Why People Use or Don't Use VPNs

Half of those who use VPNs cite better access to entertainment as one of their reasons, along with security. Almost all of them also value their privacy. And about 1/3 of respondents use VPNs for public WiFi usage (public WiFis are extremely dangerous if you connect to them with no protection) or due to work requirements (likely due to remote work or corporate network security concerns).

However, our research shows that the real reason behind the growing popularity of VPNs is not cut and dried. It turns out that it varies greatly, depending on the region of the world.

The data we discovered suggests that people in different parts of the world use VPNs for vastly different reasons:

Users in North America mostly use VPNs on weekdays and during work hours. They seem to use VPNs mostly for work, either to access their corporate networks while teleworking or to protect their work devices on public WiFi (e.g. coffee shops, airports).

It also looks like young adults (18-24 y.o.) and adults (25-34) in North America all use VPNs equally. This shows that VPNs are not seen as a fad by Americans, as both young employees and experienced professionals acknowledge the usefulness of this technology. And finally, most VPN adopters in North America use them on iOS and macOS devices.

Our research suggests that people in Asia prefer to use VPNs for entertainment purposes. They mostly use VPNs on weekends and outside of work hours. Considering that streaming and gaming are two extremely popular ways to pass time in Asia, it’s likely that VPNs are used to access them. This includes viewing streaming channels that are unavailable in the user’s country, taking advantage of regional pricing to buy games cheaper on game stores, etc.

Most VPN users in Asia are young adults (18-24). This could mean that it’s a relatively new technology for Asia, or that older people there don’t value their online privacy and security that much. Also, most people use VPNs on Android and Windows devices.

It must be noted that the picture of VPN usage in Asia visibly varies on a country-by-country basis. It looks like there is no region-wise consensus when it comes to VPNs. Local laws and legislation seem to impact people’s decision to use VPNs a lot. Curiously, the prohibition of VPNs doesn’t seem to have as much an impact as the prohibition of other services that can be safely accessed using a VPN.

Europe’s VPN usage looks like a blend between North America’s and Asia’s. Europeans prefer to use VPNs on weekends, however, the gap between the weekday use is not that huge. They use VPNs both from noon till night, peaking at 9 PM. This would imply that Europeans use VPNs both for work and entertainment. Most likely, they understand the importance of cybersecurity and anonymity, and so keep their VPNs on throughout the day.

This is further supported by the fact that most VPN users in Europe are adults (25-34). They are professionals that need to secure their personal and corporate data. And the services they use for entertainment are not as speed-sensitive as those of young adults, so a VPN connection doesn’t affect their experience.

In terms of the platform choice, Europeans seem to lean towards the Asian way, preferring to use VPNs on Android and Windows.

Here is some extra information that we discovered during our research: